Alto saxophonist/composer Caroline Davis made an indelible impression, with her 2012 debut recording “Live Work & Play,” as one of Chicago’s “strongest and most exciting jazz saxophonists” (Chicago Reader). Now based in New York City, Davis has penned an intriguing and utterly unique love letter to her former home with her new CD “Doors: Chicago Storylines,” which she describes as “an audio documentary with original music.”

Following the release of her much-praised 2012 debut, “Live Work & Play,” alto saxophonist and composer Caroline Davis relocated from Chicago to New York City and got to work on an ambitious project that had been germinating for seven years. To honor her eight-year residency in Chicago, she combines spoken stories and original compositions on her new CD “Doors: Chicago Storylines,” which will be released by ears&eyes Records on November 6.

Joining her on “Doors” are longtime members of her Chicago-based quartet. Mike Allemana (guitar) and Matt Ferguson (bass) were both collaborators of the late tenor saxophone legend Von Freeman. Drummer Jeremy Cunningham, whom Davis met at Freeman’s famed New Apartment Lounge session, adds an energetic counterpart to the rhythm section. “It was important for me to have a band that played together for a while, improvising and exploring new directions,” Davis states. “You can hear that we really know each other.”

The inspiration for “Doors” first came in 2007 while Davis was teaching a course on the history of Chicago jazz at Northwestern University. She found that 1980 to 2000 was “virtually uncharted territory,” Davis says. Eventually she conducted interviews with 15 musicians she’d found helpful and influential when she was coming up on the Chicago scene (including Art Davis, George Fludas, Bobby Broom, and Von Freeman, one of her mentors) to talk about their experiences during that time. “Hearing these storylines was a joy for all of us,” she says, “and sparked a desire in me to take a journey with my compositional muse.”

“Jazz is a collection of oral histories,” Davis adds. “We should strive to share more of them.”

On “Doors,” she pairs samples of musicians telling their favorite stories with her original compositions, some inspired by themes, others by spoken phrases. “Storylines have their own ebb and flow,” she says. “I hear texture, tone, tension, release, and variety in them, and I aim to write my pieces in the same way.” For the album, which was recorded in Chicago in 2013, the band recorded both long pieces and short interludes, uncertain of how it would all come together. But, with the help of masterful engineer Brian Schwab and hours of editing in post-production, the interviews and music melded brilliantly.

“Golden Era,” which opens the album, is a repeating theme that illustrates all these musicians’ ’80s and ’90s heyday, a time when everyone was part of a community. On “Lincoln Land,” the band sails through a triumphant melody, finally settling into a vamp that zones in on Lincoln Avenue, site of many clubs once active in the jazz community. “Lin,” one of “Doors”’ most intimate pieces, features pianist Ron Perrillo. The piece pays tribute to the great Chicago tenorman, Lin Halliday, who played extensively in the ’80s and ’90s.

Born (1981) and raised in Singapore of European expatriate parents, Caroline Davis spent early school years in Atlanta, became musically enriched living in the Dallas-Fort Worth area, and blossomed in Chicago as a professional musician. After acquiring both a Bachelor of Music in Jazz and a Bachelor of Science in Psychology at the University of Texas at Arlington, she bridged those areas in acquiring a Ph.D. in Music Cognition at Northwestern University in Evanston, Illinois.

In her dissertation, Davis, who counts Wayne Shorter, Charlie Parker, and Chicago native Lee Konitz among her prime musical influences, looked at the intricate collaborations musicians form in a scene, and related those connections to the ways they hear music.

Her experiences paved the way for her impressive and eclectic list of projects. From the folk sounds of Orso to the reggae grooves of Fatbook, the hip-hop and R&B adventures of Maitri and Deep Fayed, and the unique flow of Whirlpool, Davis has been keeping busy. In New York she holds a steady gig with drummer Billy Kaye. 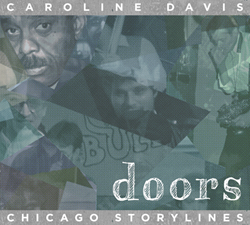