SR-71 Prepares for Flight to Science Museum of Virginia

An iconic SR-71 Blackbird aircraft will be lifted and measured in preparation for its move to the Science Museum of Virginia.

The world’s fastest and highest flying production aircraft, the SR-71 Blackbird, is preparing to move from the Virginia Aviation Museum to the Science Museum of Virginia. This iconic, supersonic stealth plane will become the focal point of the Museum’s new exhibition gallery, Speed, opening early 2016.

“Suspending a supersonic jet from the ceiling of a historic train station is perhaps one of the most unconventional presentations of an artifact, but it provides an iconic first impression to start the conversation about the science of speed,” says Richard Conti, Chief Wonder Officer, Science Museum of Virginia.

Before the plane travels to Broad Street Station, engineers and Worldwide Aircraft Recovery experts will raise the Blackbird using cranes to calculate the correct attitude for its placement in its new home. On Monday, June 29 two cranes will raise the iconic plane to determine the angle of attack and roll, determining the specific orientation with degree finders and other measuring instruments.

Worldwide Aircraft has experience moving over 2,500 aircraft, from priceless vintage planes to modern jets – including moving this specific SR-71 Blackbird from California to Virginia in 1999. The aircraft recovery company will oversee the entire move of the Blackbird: from disassembly to packaging and transportation to reassembly inside of the Science Museum of Virginia.

Weighing in at 43,000 pounds with a wingspan of 55 feet, the Blackbird will fit snugly inside of the Museum’s main concourse where it will be featured as the principal artifact for the upcoming Speed exhibition – unveiling the mind-blowing intersection of motion and time across a world of science and technology.

Speed is part of the Science Museum of Virginia’s Inspire the World Campaign, transforming Museum galleries, programs and the guest experience.

Lockheed Martin originally produced the SR-71 Blackbird as a long-range, supersonic reconnaissance aircraft, using state-of-the-art technology to provide critical information to the United States military. After its maiden voyage in December 1964, the Blackbird served the military for over three decades and still has unmatched capabilities. It is capable of flying at Mach 3.2 – reaching a record speed of 2,193 mph and altitudes over 85,000 feet. 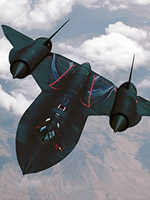