Saxophonist/Composer Russ Nolan to Release “Call It What You Want,” His 5th Rhinoceruss Music Album in 10 Years, March 31

The best jazz recordings aren’t just snapshots of a musician’s sound and concept at a particular moment. An album stands out when it captures an ongoing dialogue between an artist and his or her peers, like the wide-ranging investigations into post-bop vocabulary and Latin rhythmic idioms on New York saxophonist Russ Nolan’s latest CD, “Call It What You Want.”

A dexterous improviser with an abiding passion for Latin American rhythms, Russ Nolan delivers a deeply satisfying program of original tunes on his new CD "Call It What You Want." The prolific tenor saxophonist, composer, and arranger will release the disc, his 5th as a leader in 10 years, on his Rhinoceruss Music label March 31.

Reflecting his fluency in the post-bop vocabulary and Latin rhythmic idioms, it’s an approach quite distinct from what used to be called Latin jazz, like a good deal of the most stimulating jazz coming out of New York in recent years. Not surprisingly, Nolan has collaborated with some of the Latin musicians in the vanguard of this movement, like the brilliant Cuban pianist Manuel Valera (who played on Nolan’s previous release, 2013’s critically hailed "Relentless").

“I hope I’m part of this larger conversation,” Nolan says. “I didn’t grow up in Cuba or with this music, but I’ve really connected with these rhythms through a lot of study. You can’t throw out all the rules, but you take the tradition and honor it by being rebels in your own time. You take what you’ve absorbed and make it your own.”

Nolan’s striking arrangement of “My Ship,” for instance, is set to an Afro-Peruvian Lando rhythm and finished in a Coltrane-style modal vamp. His varied originals include “Mi Remedio,” a cha-cha written for his wife Luz; “Canción Sabrosa,” a mambo in rhumba clave; and “Las Teclas Negras,” an E-flat minor blues played as a medium-tempo mambo in 7/4. “This recording is another chapter in my study of Latin rhythms and their application to the modern jazz harmony I enjoy writing,” says the leader.

One reason that Nolan has continued to evolve is that he takes pains to surround himself with superior players. Pianist Mike Eckroth attracted widespread attention while touring with John Scofield (2010- 2012), though he’s also obviously delved deeply into Afro-Caribbean and Afro-Brazilian waters.

Brian Fishler, who’s played on Nolan’s last three albums, is “one of the most versatile drummers in town,” says the saxophonist. Bassist Daniel Foose, a more recent member of the fold, is a highly assured player who lives across the street from Nolan in Sunnyside, Queens, and shares his University of North Texas affiliation. Far more than a master percussionist, Victor Rendon is also an essential mentor for Nolan who has helped inculcate his deep knowledge of Cuban rhythms. “He and Yasuyo [Kamura] are an amazing team,” Nolan says. “I met them on a salsa gig, and she played on three tracks on 'Relentless.'”

Nolan’s concern with rhythm began coming into clear focus in the late 1990s, when he was living in Chicago. Saxophonist Chris Potter came through town with Dave Holland’s band and gave Nolan the first of what would become many lessons. “He could have talked to me about scales and harmony and all this other stuff,” Nolan recalls, “but he really impressed upon me that the horn player has to have the same mastery of time as the rhythm section and can’t rely on them to carry him along.”

Nolan had moved to Chicago after graduating from North Texas State and studied with local saxophonist Rich Corpolongo as well as with visiting New Yorkers Dave Liebman and Kenny Werner. In 2000, pianist Werner convinced Nolan to move to New York City—and would play on the saxophonist’s 2008 CD "With You in Mind" (Nolan’s debut recording was 2004’s "Two Colors").

Introduced to clave by his interest in dance (he’s an accomplished salsa dancer), Nolan has connected with the burgeoning pan-American scene in New York. For the past two years he’s led a salsa band that performs for dancers.

“There are all the different nationalities in New York—Peruvian, Panamanian, Cuban—and the deeper I got the more I liked it,” Nolan says. “There’s so much information here. For the past year I’ve been studying percussion with Victor Rendon, so I can take these Cuban rhythms and apply them to jazz harmonies I studied with Kenny Werner. It’s just another chapter in my rhythmic exploration.”

CD release shows for "Call It What You Want": 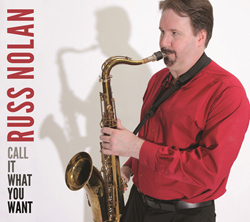