The past, present, and future of jazz brilliantly coexist on “Present Time,” the second album by tenor and soprano saxophone virtuoso and visionary composer Matt Parker. He now blows his horns in the spare company of just bass and drums–played by longtime colleagues Alan Hampton and Reggie Quinerly, respectively–and more than rises to the challenge of the jazz trio format.

Tenor and soprano saxophone virtuoso and visionary composer Matt Parker made a vivid impression with his 2013 debut recording, “Worlds Put Together.” “Restlessly inventive” (Down Beat), Parker is “a fully formed artist with his own unique voice [who] sounds comfortable promenading down multiple paths” (All About Jazz).

For his new recording “Present Time,” Parker pared down the sextet of Worlds to a powerhouse trio comprised of bassist Alan Hampton and drummer Reggie Quinerly, colleagues of his since all three were classmates at the New School nearly 20 years ago. Scheduled for release on February 12 by Parker’s BYNK label (“Because You Never Know”), the CD consists of seven Parker originals, one old standard, and a previously unrecorded tune by the late, great Charles Mingus. Vocalist Emily Braden is added on three tracks, and Jerome Jennings plays tambourine on another.

Few saxophonists have internalized so much of the instrument’s history in jazz as has Parker. In his playing, one hears echoes of Ben Webster’s gentle and brutish sides, Lester Young’s lyricism, Sonny Rollins’s unfettered imagination, Rahsaan Roland Kirk’s adventurousness, and the types of extended techniques associated with John Coltrane and Albert Ayler.

The CD opens with “Noah’s Arc,” a swinging groove blues featuring Parker on tenor that he has reworked from an earlier composition to partially exemplify his philosophy of “present time.”
“There are many meanings behind ‘present time,’” he explains. “I’ve often thought about what it would be like to visit the past knowing what I know now. One change I made was to manipulate the blues form. You have an elongated blues that modulates to a traditional 12-bar blues.”

The trio, with Parker on tenor, is joined by Braden for the lovely “Winter’s Gone.” “I love working with vocalists,” the leader says. “Once Emily starts, she never stops. It lends itself to time and the fact that the seasons wait for no one.”

The oft-recorded “I’m Confessin’ (That I Love You)” was first popularized by Louis Armstrong in 1930. The present lightly swinging version features Braden’s warm alto pipes and Parker’s big-toned tenor. “I love Louis Armstrong and Lester Young, and this gave me an opportunity to play one of my favorite songs by them,” he says.

Prior to being recorded by Parker on tenor, Charles Mingus’s lullaby-like “Song to Keki” had no title and had been heard only in 46- and 20-second versions played by the composer on piano for his then-5-year-old daughter Carolyn (nicknamed “Keki”) in the documentary film “Mingus: Charlie Mingus 1968.” Parker, who has been playing with the Mingus Big Band periodically for the past year, was given permission by Sue Mingus to record it and she named it after her late husband’s child.

At times during Parker’s arrangement of the song, he, Hampton, and Quinerly all seem to be flying off in different directions while the underlying pulse remains steady. “One of the things that I am very fond of that appears in Charles Mingus’s music is elasticity—the idea of stretching the time,” the saxophonist explains.

Born (in 1979) and raised in Fort Lauderdale, Florida, Matt Parker started out on alto saxophone and switched to tenor, which he played on a life-changing summer gig in New Orleans as a teenager. That experience inspired his first composition, “Sixteen,” which is revisited on “Present Time.”

Parker moved to New York City in 1999 and enrolled at the New School, where his classmates included Hampton and Quinerly, with whom he has played frequently ever since. Among his New York mentors were Junior Mance, Jane Ira Bloom, Reggie Workman, and Charli Persip. Parker was a member of Maynard Ferguson’s Big Bop Nouveau Band from 2004 to 2006 and made his debut recording as a soloist on the album “M.F. Horn VI: Live at Ronnie Scott’s.”

Besides performing with his trio at Cornelia Street Cafe and Nublu, both in New York City, and subbing in the saxophone section of the Mingus Big Band at the Jazz Standard, Parker has toured internationally for the past five years with HessIsMore, a band led by Danish drummer and composer Mikkel Hess that plays, in Parker’s words, “disco punk jazz.” The saxophonist has also appeared around the Big Apple with Beastie Boys rapper and guitarist Ad-Rock and drag-king comedian Murray Hill and was seen playing saxophone in the television series “The Real Housewives of New York” and the motion picture “John Wick.” 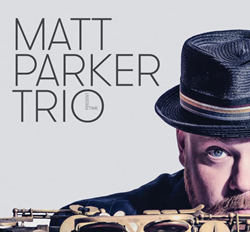