Blessed with “a voice of phenomenal beauty” (Stephen Holden, New York Times), Jane Monheit has had plenty of milestone moments in establishing herself as one of today’s best and most important vocalist-musicians. With her new album, “The Songbook Sessions: Ella Fitzgerald” — the first to be released on her own Emerald City Records — the Long Island native fulfills a long-held dream of recording a tribute to her early (and lifelong) inspiration.

Vocalist Jane Monheit had long thought about recording an Ella tribute. Fitzgerald’s beloved songbook albums held “Biblical” importance for her when she was growing up and have never lost their hold on her.

Those dreams have come to fruition with Monheit’s new album, “The Songbook Sessions: Ella Fitzgerald.” It was the perfect maiden project for her new label, Emerald City Records, which will release the disc April 8, on the cusp of the Ella Fitzgerald centennial. On this new offering, Monheit pays joyous tribute to her idol while sharing a definitive portrait of herself, guided by her producer, arranger, and trumpet great, Nicholas Payton.

“This record is really different,” Monheit says. “It’s the first time I’ve made a recording without a label and so I was able to make all the decisions myself. Honestly, when I listened back to the takes, I heard a different singer than I’ve heard before—a more mature one. It was a little scary because there’s a certain raw quality to some of the vocals but we gave no thought to fixing them. These were the vocals of a 38-year-old woman with a lot of life experience. These tracks really express who I am.”

“My first priority was to make Jane comfortable, so all she had to worry about was showing up and singing,” says Payton, who first met her in Brazil about five years ago and stayed in touch casually. “But on the other hand, I wanted to make her a little uncomfortable by pushing her into places she might not push herself. She is so multifaceted. I wanted to showcase a lot of different things she loves to do on any given night with her band that haven’t necessarily been brought forth on her recordings.”

From the first song, “All Too Soon,” a highlight of Fitzgerald’s Duke Ellington Songbook, it’s evident that this album is not going to be your usual Ella salute—the kind that plays up the incomparable singer’s swinging, scatting, girlish side. Monheit is all woman here, pouring herself into the lyric with sultry savoir faire.

“It is a salute in name only,” writes Christopher Loudon in his JazzTimes review. “Fitzgerald and Monheit are very different singers, their approaches to the material similarly valid but utterly distinct. Monheit’s style is plusher and denser—crushed velvet to Fitzgerald’s silk. . . . ”

As the arranger of eight of the songs, Payton updated the harmonies and overall feel of several of the tunes. “I wanted to make them romantic and sexy,” he says. “We look at love and sex a lot differently today than we did 60 years ago.” Longtime band mates, pianist Michael Kanan and bassist Neal Miner, who each arranged two songs, also made contributions to the fresh arrangements on the album.

Kanan, Miner, and drummer Rick Montalbano—Jane’s working trio—appear on the new CD, along with percussionist Daniel Sadownick; harpist Brandee Younger (on two tracks); and Payton, on trumpet, piano, and organ. “Nick wasn’t planning on playing on the album,” says Monheit, “but after we discovered what strong chemistry we had, it was inevitable that we had to play together. It was a real honor and a thrill for me.”

Jane Monheit has been on the world stage for nearly half her life, since placing as first runner-up (behind Teri Thornton) at the 1998 Thelonious Monk Institute’s vocal competition. The Long Island native studied voice at the Manhattan School of Music, where she met her husband, Rick Montalbano, and graduated with honors in 1999. Her debut album “Never Never Land”—featuring Kenny Barron, Ron Carter, and Lewis Nash—was released the following year.
Monheit recorded prolifically for a number of different labels before realizing in the last couple of years that she needed to take more control of her artistic and career decisions; hence, the birth of Emerald City Records. “You have no idea how exhausting it was, bouncing from label to label,” she says. “Everyone wanted to mold me into something else. It became harder and harder to put trust in people and to be myself.”

In Payton, the vocalist has found a true creative partner. “I felt an instant trust in him that I had never felt before with any other producer,” she says. The two envision “The Songbook Sessions” as the first in an ongoing series of collaborations. 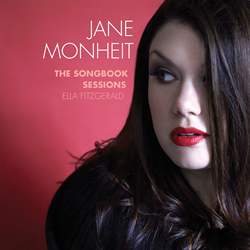