Now a noted jazz trumpeter, composer, arranger, bandleader, and educator, Bill Warfield came to know, study with, and make records with his biggest trumpet inspiration, Lew Soloff, who died in 2014 at age 71. Warfield’s latest album, “For Lew” on Planet Arts Records, is a tribute to his late friend compiled from material recorded by his orchestra between 1990 and 2014.

Bill Warfield’s career as a trumpeter was launched the moment he heard Lew Soloff’s immortal solo on the Blood, Sweat & Tears hit “Spinning Wheel.” “It just completely knocked me out,” says Warfield, who was 18 at the time and gigging as a pianist, having given up hope of earning a living as a horn player due to dental problems. “I’d never heard anything like it.
I decided at that point that I wanted to play the trumpet again.”

Eventually, Warfield would get to know, study, and record with Soloff, who died in 2014 at age 71. Warfield’s latest album, “For Lew,” set for release on March 9 by Planet Arts Records, is a tribute to his late mentor, colleague, friend, and inspiration. Compiled from material Warfield recorded with his big band between 1990 and 2014, the album includes ten selections that first appeared on “New York City Jazz” (1990), “The City Never Sleeps” (1994), “A Faceless Place” (2005), and “Trumpet Story” (2014). Two of the tracks are previously unreleased.

“Lew was such a warm, supportive human being,” Warfield says of Soloff. “When he died, it took me a week to get over it. I patterned my playing after him. I wanted to do the gigs he did. I wanted to sound like him. I wanted to be like him. I wanted to be him. I patterned my whole career after that guy. He was a little nerdy guy who would put a horn in front of his mouth and became Superman. He was the guy who got me to take my writing seriously. On the second record I used him on, I used a few other people’s charts. Then he pulled me to the side and said, ‘Look, your writing is really special. You shouldn’t include anybody else’s stuff on your records.’”

Five tunes on “For Lew” are Warfield originals; six arrangements are his. While drawn from four different sessions, each made up of different players, every track is an all-star affair. Soloff is the soloist on one track, “Salsa En Mi Alma,” and is heard playing lead trumpet on that song and two others. In addition to Warfield, who solos on three tracks, other world-class instrumentalists among the disc’s collective personnel are trumpeters Randy Brecker and John Eckert; trombonist Matt Havilan; saxophonists Dan Block, Andy Fusco, Bob Hanlon, Rich Perry, Chris Potter, and Walt Weiskopf; pianists Ted Rosenthal and Joel Weiskopf; guitarists Vic Juris and Dave Stryker; bassist Mike Richmond; and drummers Tim Horner and Bob Weller.

Warfield followed Soloff’s advice and over the past quarter century has created a canon of music for large ensemble that showcases his distinctive composing and arranging style. He counts Hank Levy, Fred Lipsius, Dick Halligan, Mike Abene (who would produce his first two big band albums), Michel Colombier, Charles Mingus, Thad Jones, Gil Evans, and Bob Brookmeyer, along with Tchaikovsky, Debussy, Webern, Prokofiev, and other classical composers, as influences on his arranging style.

Bill Warfield was born in Baltimore on March 2, 1952. He took up trumpet in the fourth grade because, he says, “it looked cool. Because it only had three buttons, I thought it would be easier to play.” By the time he was 14, he played Saturday mornings with the orchestra and brass ensemble at the Peabody Conservatory Preparatory School and Saturday afternoons with the Maryland Youth Symphony, as well as with a teenage soul band called Nina and the Marcels.

After recovering from a car accident in which he lost his front teeth, he studied for four years at Towson State with Hank Levy, an arranger noted for his charts for Don Ellis and Stan Kenton who was a key early influence.

Warfield moved to New York City in 1980 and began subbing in the Mel Lewis Jazz Orchestra, playing and arranging for the Bill Kirchner Nonet, and copying music for Lester Bowie, Joseph Jarman, and others, while earning a master’s from the Manhattan School of Music. He toured Europe with Ornette Coleman, having been recommended by Lew Soloff.

Warfield has spent three decades as an inspiring music educator. After stints at the Dalton School in New York, Brooklyn College, Towson State University in Maryland, and the University of North Florida, he joined the faculty at Lehigh University in Bethlehem, PA, in 1996. He continues to teach and direct the jazz program there three days per week.

The other four days are usually spent in back in Manhattan, where he currently directs four bands: the New York Jazz Repertory Ensemble, the New York Jazz Octet (which includes tenor saxophonist Don Braden and pianist Kenny Werner), the Hell’s Kitchen Funk Orchestra, and the Bill Warfield Big Band.

The Bill Warfield Big Band will be performing two sets (7:00pm/8:30pm) at the Zinc Bar in Greenwich Village to celebrate the release of “For Lew.” 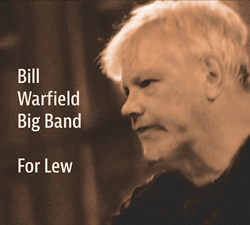 It is one thing to watch the social justice movement on television or read about it online. It's another to experience it firsthand.
View on Facebook
·Share